I’ve been obsessed with Paris for as long as I can remember. I studied there in college and have gone back numerous times since. Last fall, I looked at airline tickets, which turned out to be shockingly cheap, so we impulsively bought tickets for a week-long trip in January 2019. Paris in January can be a little chilly, so I decided in advance that we’d spend an unusual amount of time shopping. Here are the highlights.

January Sales Are Amazing: France has its sales twice a year (January and June, I believe), and the sales are no joke. Literally every retail shop had signs up advertising their sales. For example, in Le Bon Marché, I saw Chloe, Prada, Jimmy Choo, and Valentino shoes for half off. It was crazy.

Chanel Rue Cambon: Visiting the original Chanel location was everything I dreamed it would be. I was a little worried about crowds, grumpy sales associates, etc, but it was so much fun. We walked right in and back to the handbags. I was searching for a black Chanel Mini Rectangular (like everyone else on the planet, I guess), but they only had minis in the spring colors. Even though the SA knew that he didn’t have what I wanted, he spent the next hour showing me dozens of bags and letting me try them on. It was such a delight. I’d say that the Rue Cambon shop is definitely worth a visit.

Le Bon Marché: This is a great, under-the-radar department store. I decided to try Le Bon Marché because of its on-site VAT refund office, which sounded really appealing. I ended up buying a Celine Nano Luggage Tote, which included a couple hundred euros worth of taxes (more on that later). Here are a few quick pics of my cute new Celine: 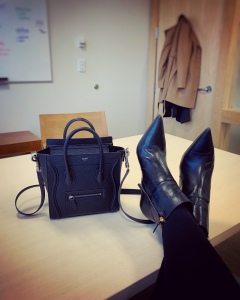 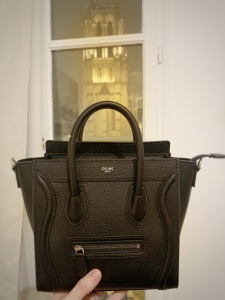 (As an aside, the color of the black for the Celine is actually a very cool black. The bottom picture, which I took in our Paris apartment, just had really warm lighting.)

As for Le Bon Marché itself, they had a good selection, and the sales associates were all really nice. The store wasn’t too busy either. I spent most of my time in the handbags and shoes. I was particularly impressed with the shoe collection. Like I mentioned earlier, the shoe sales were next level. These shoe sales alone might warrant an annual January trip to Paris.

VAT Refund Process: Surprisingly, the VAT process at Le Bon Marché and CDG Airport was a breeze. At Le Bon Marché, when I purchased the Celine handbag, the sales associate asked for my passport and filled out some paperwork for me, which he instructed me to take up to the third floor. On the third floor, right by the escalators, there is a whole suite of people there to process the paperwork. At reception, you hand them the paperwork, and they send you over to a numbered desk. The nice person at the desk then asks you when you’re leaving the EU and whether you want your refund then (in cash) or later. I took my refund in cash. With the cash, they gave me a packet of papers that they instructed me to scan when I left the EU. I was a little worried about this, but it was super easy. At CDG (we were in Terminal 1), you just walk up to these little machines called PABLOs where you scan the barcode and go on your merry way.

Finally, a shout out to all the wonderful sales associates. All said and done, we stopped into Dior, Prada, Gucci, Chanel, and Celine, and all of the sales associates who helped us were simply the sweetest. Almost all of them even offered us sparkling wine, which was very tasty. Yum.

So that’s all to say, if you’re looking to do some serious damage to your wallet in Paris, I’d recommend going in January. Between the sales and no crowds, you almost forget that it’s cold.